The U.S. Navy and U.S. Army jointly executed the launch of a common hypersonic glide body (C-HGB), which flew at hypersonic speed to a designated impact point.

Concurrently, the Missile Defense Agency (MDA) monitored and gathered tracking data from the flight experiment that will inform its ongoing development of systems designed to defend against adversary hypersonic weapons. 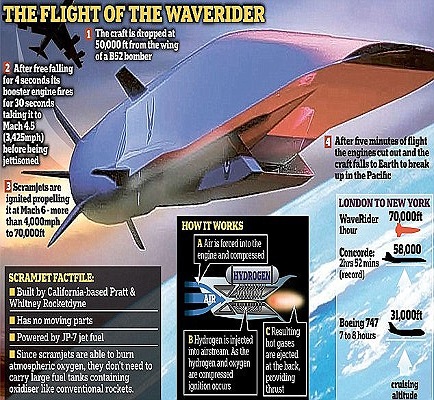 Information gathered from this and future experiments will further inform DOD’s hypersonic technology development, and this event is a major milestone towards the department’s goal of fielding hypersonic warfighting capabilities in the early- to mid-2020s.

”This test builds on the success we had with Flight Experiment 1 in October 2017, in which our C-HGB achieved sustained hypersonic glide  at our target distances,” said Vice Adm. Johnny R. Wolfe, Director, Navy’s Strategic Systems Programs, which is the lead designer for the C-HGB. ”In this test we put additional stresses on the system and it was able to handle them all, due to the phenomenal expertise of our top notch team of individuals from across government, industry and academia. Today we validated our design and are now ready to move to the next phase towards fielding a hypersonic strike capability.”

Hypersonic weapons, capable of flying at speeds greater than five times the speed of sound (Mach 5), are highly maneuverable and operate at varying altitudes. This provides the warfighter with an ability to strike targets hundreds and even thousands of miles away, in a matter of minutes, to defeat a wide range of high-value targets. Delivering hypersonic weapons is one of the department’s highest technical research and engineering priorities.

”This test was a critical step in rapidly delivering operational hypersonic capabilities to our warfighters in support of the National Defense Strategy,” said U.S. Army LTG L. Neil Thurgood, Director of Hypersonics, Directed Energy, Space and Rapid Acquisition, whose office is leading the Army’s Long Range Hypersonic Weapon program and joint C-HGB production. “We successfully executed a mission consistent with how we can apply this capability in the future. The joint team did a tremendous job in executing this test, and we will continue to move aggressively to get prototypes to the field.”

The C-HGB – when fully fielded – will comprise the weapon’s conventional warhead, guidance system, cabling, and thermal protection shield. The Navy and Army are working closely with industry to develop the C-HGB with Navy as the lead designer, and Army as the lead for production. Each service will use the C-HGB, while developing individual weapon systems and launchers tailored for launch from sea or land.

The similarities in hypersonic weapon design for sea and land variants provide economies of scale for future production as we build the U.S. hypersonics industrial base.

“Hypersonic systems deliver transformational warfighting capability,” said Mr. Mike White, Assistant Director, Hypersonics, OUSD Research and Engineering (Modernization). “The glide body tested today is now ready for transition to Army and Navy weapon system development efforts and is one of several applications of hypersonic technology underway across the Department.  These capabilities help ensure that our warfighters will maintain the battlefield dominance necessary to deter, and if necessary, defeat any future adversary.”

Additionally, MDA is working closely with Army and Navy in sharing data that will inform their development of enhanced capabilities for a layered hypersonic defense to support warfighter need and outpace the adversary threat.