Illinois wants to play catch-up with its rainy day fund at what is likely the worst possible time.

With 11 years of bull market behind us and a pandemic that is starting to make its way across the globe, it is only now that Governor J.B. Pritzker has decided he wants to help bolster the state’s safety net. He’ll be playing catch up to many other states, who used the last decade to bolster their respective states’ funds, according to Bloomberg.

The Democratic governor is proposing putting $50 million from the state’s surplus into a “budge stabilization fund” this year and then doing the same thing in 2021 if voters approve an income tax referendum currently before the state. The fund was almost depleted in 2017 when the state’s government, led by a Republican Governor with a Democratic legislature, locked up.

Meanwhile, the rest of the country holds a record $74.9 billion in rainy day funds. Once again, Illinois is behind the eight ball.

U.S. states have seen nine straight years of increases to their rainy day funds and can run operations for a median of 27.9 days on these funds. Illinois has funds for less than one day. 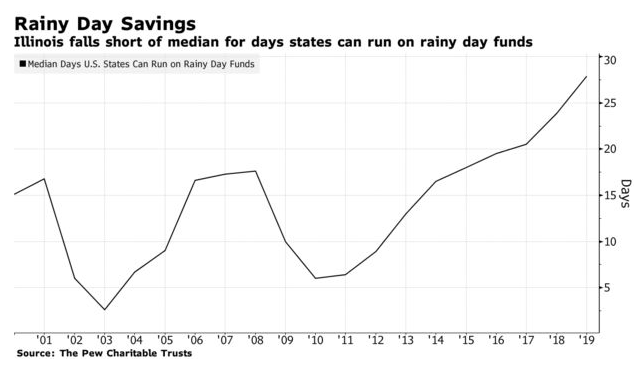 Justin Theal, an officer with Pew said simply: “Illinois is less prepared.” The state currently has a paltry $58,655.62 in its rainy day fund. Legislation has been proposed to automatically increase monthly transfers to the fund when the state’s bill backlog is less than $3 billion. Currently, that backlog sits at $7.3 billion.

The purpose of rainy day funds is to give states a cushion: help them rely less on budget cuts or protect against drops in revenue or when the economy starts to grind to a halt. Gov. Pritzker calls his proposed idea “repairing the financial damage of the past.”

Eric Kim, senior director of public finance for Fitch Ratings says the $100 million proposed for the fund over the next 24 months is a “step in the right direction”. We wonder if Kim knows that no money has actually been put away yet and that it’s just a corrupt bureaucratic spending circle jerk that that will likely result in the money being siphoned off elsewhere before it ever hits Illinois’ savings account.

But even in a best case scenario, allow us to offer a reality check: the idea of having the state’s financial house in order well enough to contribute to this fund over the next 24 months will be at the behest of the economy and the stock market holding up. If this this week’s volatility and the emerging coronavirus threat is any indication, we may be on the precipice of a long-overdue tipping point for both the economy and the market.

And this would be the time you would want the rainy day fund to tap into – not the time to decide to start saving for one. Can Illinois save $100 million in 2 years? We’ll follow up on this story as it develops – but as for our bet, we’ll take the under.

COVID-19 Is Not Even Close To America’s Biggest Problem

Some Positives in a Virus Wracked World

COVID-19 Is Not Even Close To America’s Biggest Problem