CNN has long been criticized for what many view as overtly hostile coverage of Sen. Bernie Sanders that goes back to the 2016 election where the CNN openly seemed to favor Hillary Clinton in her bid for the nomination.

Yet, even for the most hardened critics of the network, yesterday’s debate in Des Moines was breathtaking in its unrelentingly negative questions of Sanders followed up relative softballs to others like Sen. Amy Klobuchar. However the lowest moment of this or any debate this year occurred when CNN reporter Abby Phillips made Sanders repeat his outright denial of the allegation by Elizabeth Warren that he told her that no woman could be president and then immediately stated that Sanders did make the comment in her next question to Warren. In watching with a room filled with people who are not affiliated with Sanders, Phillips’ statement led to loud gasps and Sanders himself seemed dumbfounded on stage by the bias shown by the CNN reporter. Later, Warren pointedly refused to shake the hand of Sanders.

In the debate, Sanders repeatedly and unequivocally stated that he never made the statement. While some have built up the allegations as a type of political MeToo moment, many remain skeptical for the very reasons that Sanders stated. It seems entirely at odds with Sanders’ numerous statements and actions over the years, including his standing aside for Warren herself when she indicated that she wanted to run in 2016. Moreover, it would have been perfectly insane to go to a meeting where Warren just discussing her next run for president and make such a clearly untrue and self-destructive statement. Even if Sanders believed such sexist tripe, why would he make the comment to a possible opponent who was clearly going to run? It would also been moronic since, when he made the statement, Clinton had already beaten Trump in the popular votes by millions. Why would Sanders say something that was proven to be demonstrably untrue in the last election? The point is not that Sanders is telling the truth and Warren is lying. Rather the point is that there is no reason to just reject the position of Sanders as clearly false as Phillips appeared to do last night.

Even in her set up, Phillips seemed to reject Sanders’ earlier denials of the story:

“Senator Sanders, CNN reported yesterday, and Senator Warren confirmed in a statement, that in 2018, you told her that you did not believe that a woman could win the election. Why did you say that?”

While Sanders made these points and repeatedly denied the allegation, Phillips left many of us confused when, literally just after he again denied the story, she asked him again if he denied the story. Some in the audience laughed at the weird follow up but that was followed by gasps when Phillips then turned to Warren and said “Senator Warren, what did you think when Senator Sanders told you a woman could not win the election?”

CNN: “You’re saying that you never told Senator Warren that a woman couldn’t win the election?”

CNN: “Warren, what did you think when Sanders said a woman couldn’t win the election?”

Phillips then turned to Klobuchar and asked her how she felt about people making such comments to female candidates.

I am not personal friends with Sanders but I have had dealings with him for many years both in hearings and on the Hill. I have always admired him as a person and I have never had reason to question his veracity or integrity. I have also never heard anyone suggest that he was not entirely supportive of women’s rights.

The decision of Warren not to shake Sanders’ hand does not bode well for the next few weeks. The sudden raising of this allegation when Warren is struggling to break out of pack in Iowa was obviously a concern by neutral observers. While Warren says that she is shocked by the story, she did not previously raise it and still last night would shake the hand of Sanders.

Whatever the outcome of this conflict between Sanders and Warren, CNN may have the most to answer for after the debate. CNN has often voiced the view of the DNC and Democratic establishment, particularly in seemingly repeating talk points against Trump. Indeed, in 2016, a CNN figure, Donna Brazile, was found to have leaked questions to Hillary Clinton’s campaign and then denied the story by falsely alleging that her emails were hacked. In the last couple weeks, there have been stories of DNC figures and establishment figures moving (again) against Sanders to prevent him from securing the nomination. The only people who have raised bias as often as Trump supporters are Sanders supporters. Just this week, this bias was raised before the debate by Sanders people on the air. CNN responded with clearly biased questions and one moderator all but calling Sanders a liar.

If the other questions were equally heavy handed to the other candidates, this would just be a case of hard hitting questioning. However there was a notably slanted quality to the questions. Thus, Biden was asked about this vote on Iraq in a good question but was not confronted on his false statements that he opposed the war in Iraq. Likewise, CNN hit repeatedly at Sanders not giving hard figures for his health plan but did not press people like Warren on her clearly unsupported projections of revenue to support her plan.

The problem is that the bias was so open and frankly gross that it could have the opposite effect in pushing people toward (not away) from Sanders. 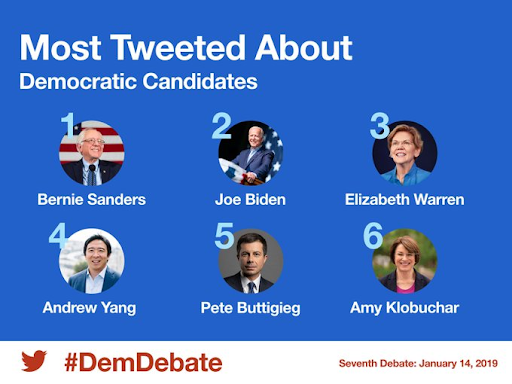 And we note that Andrew Yang wasn’t even in the debate.

‘Black And Latino Males Don’t Know How To Behave In The Workplace’: Bloomberg Flashback