BofA’s periodic report on “The Biggest Pictures”, published by Chief Investment Stategist Michael Hartnett, is always a treat, if for no other reason than the remarkable context it provides on some more contemporaneous themes such as rates, markets and core secular economic forces (such as the 4 deflationary Ds of Deleveraging, Debt, Demographics and Disruption). This time, it was doubly so because it summarized the bank’s “alternative base case” (the “less than optimistic” one, not carted around by Savita Sumbranaian for CNBC purposes), which notes that while the bank remains bullish on the remainder of 2019, is confident that the wheels off this market finally fall off in 2020.

This is how Hartnett explains his current investment philosophy. First the good news:

We are bullish on risk assets in 2019 as bearish investor sentiment & the irrationality of central banks and bond markets allow an “overshoot” in credit & equity prices this autumn (note trade war thus far bullish via lower rates rather than recession).

Now the not so good:

This also means that when looking at the outcome for risk assets, there are two possibilities: a positive risk, and a negative one. As Hartnett explains, “the positive risk for markets is an orderly rise in bond yields and Great Rotation from bonds to stocks as policy makers successfully postpone recession.”

Should that fail to happen, “the negative risk for markets is a disorderly rise in bond yields as bond bubble bursts causing Wall St deleveraging & Main St recession.”

We predict a “Big Top” in asset prices in coming quarters once policy stimulus peaks and/or policy impotence is visible.

Despite the trade war grabbing all the headlines in 2019, returns from equities, bonds & commodities have been incredibly strong as once again bearish positioning & bullish monetary policy have trumped the macro.

Meanwhile, since everyone is positioned to expect further yield downside as the most recent Fund Manager Survey showed with recession expectations the highest since the financial crisis, Hartnett believes that “the most contrarian trade in the 2020s is “long inflation”, meanwhile the “War on Inequality” is ultimately bearish for asset prices; Such a scenario would be “an overshoot in equities & credit likely to be followed by overshoot in gold and outperformance of value stocks versus growth stocks in 2020s.”

Next, to summarize the various secular themes that dominated the current decade and what he expects will be market moving in the next ten years, Hartnett shows the following breakdown of core market themes: 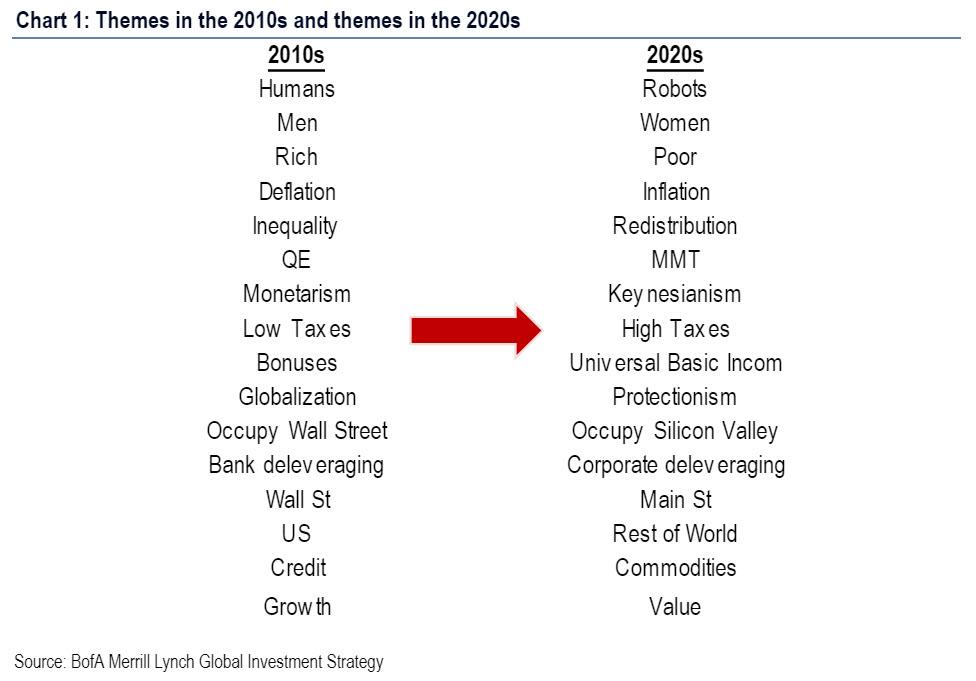 That wraps up the investment reco part of the report, which then brings us to our own favorite part, the odd (or “biggest” as Hartnett calls it) statistics, which are as follows (highlights ours):

Of the stats above, certainly the most jarring is the number of rate cuts “since Lehman”, as the world returns to a low-rate regime after a brief and explosive attempt at renormalizing monetary policy (which as everyone knows ended with a bang in Q4 2018). Putting that in context, Hartnett notes that “The 2020s will begin with the lowest interest rates in 5000 years”

And some additional observations:”

The lowest global interest rates in 5,000 years are driven by…

Deleveraging: banks, crucial providers of credit, have been shrinking balance sheets (note market cap of financial sector down from 26% in ’07 to just 16% of global stock market today).

Demographics: US labor force growth leads US inflation and set to remain very low in coming years; in Japan/Russia/Southern Europe working population will contract by 20 million by 2025.

…and Wall St still “too big to fail”

But the moment of error & impotence has yet to arrive. And thus the bull market continues in 2019.

All The World’s Wealth In One Visualization

944 Trillion Reasons Why The Fed Is Quietly Bailing Out Hedge...