Still smarting from his 2016 defeat in the Democrat primaries, Vermont Sen. Bernie Sanders will stop at nothing to get votes.

And is this cartoon shows, he is likely not done with offering more free things in an attempt to purchase your vote. 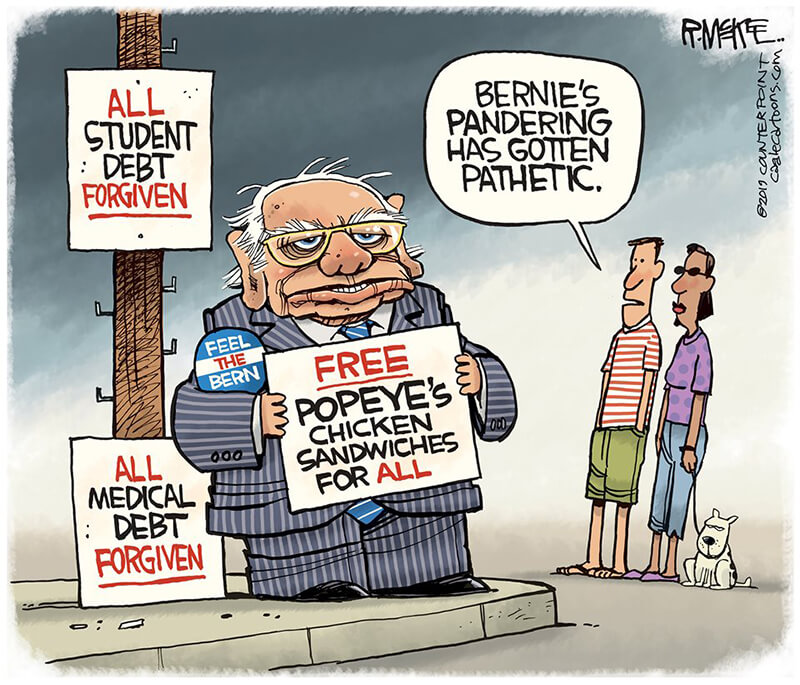 The likelihood of the senator promising free chicken sandwiches is remote, but not impossible, and that is what is frightening.

But what is more frightening is what he promised on Wednesday. The United States government funding abortions worldwide.

It was a peek at what communism would look like in America and if the press would report it fairly no Democrat would ever be elected again.

The most frightening part of the entire town hall on Wednesday was when Vermont Sen. Bernie Sanders said he was in favor of population control.

“Human population growth has more than doubled in the past 50 years. The planet cannot sustain this growth. I realize this is a poisonous topic for politicians, but it’s crucial to face,” a teacher said to the senator.

“Empowering women and educating everyone on the need to curb population growth seems a reasonable campaign to enact.

“Would you be courageous enough to discuss this issue and make it a key feature of a plan to address climate catastrophe?” she said.

The senator responded that, not only is he in favor of abortions in the United States, he wants to fund abortions in other nations.

“The answer is yes, and the answer has everything to do with the fact that women — in the United States of America — have the right to control their own bodies and make reproductive decisions,” he said.

“The Mexico City agreement — which denies American aid to those organizations around the world that allow women to have abortions or even get involved in birth control — to me is totally absurd.

“I think especially in poor countries around the world, where women do not necessarily want to have large numbers of babies and where they can have the opportunity through birth control to control the number of kids they have [is] something I very, very strongly support,” he said.

And Sen. Kamala Harris was one, of many, Democrat presidential candidates who said they want to control what you eat, The Trump War Room said.

“Kamala Harris says Americans need to be ‘educated about the effect of our eating habits on our environment,’ and says she would change the dietary guidelines to reduce the amount of red meat you can eat,” it said.

Kamala Harris says Americans need to be "educated about the effect of our eating habits on our environment," and says she would change the dietary guidelines to reduce the amount of red meat you can eat. #ClimateTownHall pic.twitter.com/XqcFzLv479

And Andrew Yang, in addition to saying he wants everyone to drive electric cars, also wants to control what you eat.

He, and other Democrat presidential candidates, appeared during a marathon of town halls on CNN on Wednesday.

And his idea for combating climate change is to have government tell you what you and your family are allowed to eat.

“The U.N. just released a study that said we’re going to be okay if the vast majority of the world goes vegetarian immediately. See that?

“So it’s good for the environment. It’s good for your health if you eat less meat. Certainly, meat is an extraordinarily expensive thing on produce from an environmental sustainability point of view.

“So I think it would be healthy on both an individual and societal level for us to move in that direction.

“But again, this is a country where there’s a lot of individual autonomy, so you can’t force people’s eating choices on them.

“All you can do is try to shape our system so that over time we evolve in a productive way,” the Democrat candidate said.

But make no mistake, he despises the fact that you have individual autonomy and, as his statement shows, he would love to tell you what you are allowed to eat.

Democrats, and Yang is no exception, are in favor of the government controlling every aspect of your life

Andrew Yang wants the government to “shape our system” to discourage people from eating meat pic.twitter.com/O6rjXixL2p

Just how radical is Andrew Yang? He wants the government to control what is on your dinner plate:

He wants the government to “shape our system” to discourage meat consumption. pic.twitter.com/VzRd4Kukoz

Video: CNN's Wolf Blitzer wonders to Andrew Yang if Americans should (read: forced to) change their eating habits and become vegetarians b/c MERELY eating meat is a "major driver of climate change." Blitzer didn't say it, but he probs would have cited the farting #ClimateTownHall pic.twitter.com/QPZQhjhBHR

So far Kamala and Yang want to make you eat less meat, Kamala wants to sue the oil and gas companies, and Kamala wants to get rid of the filibuster to pass the Green New Deal