Authored by Mike Shedlock via MishTalk,

Former Federal Reserve Chairman Alan Greenspan says he wouldn’t be surprised if U.S. bond yields turn negative. And if they do, it’s not that big of a deal.

“There is international arbitrage going on in the bond market that is helping drive long-term Treasury yields lower,” Greenspan, who led the central bank from 1987 to 2006, said in a phone interview. “There is no barrier for U.S. Treasury yields going below zero. Zero has no meaning, beside being a certain level.”

Joachim Fels, global economic adviser at Pacific Investment Management Co., detailed earlier this month a view that there’s been a change in the fundamental economic theory of time preference that helps explain why people are buying debt with negative yields. He postulated that extended life expectancy and an aging population have caused people to value future consumption more than current spending.

Greenspan, 93, said he views Fels’s thesis as very plausible and also a reason why more debt has a yield below zero. He doesn’t think it will last forever.

In a CNBC interview, the longtime central bank chief said the prolonged period of low interest rates is about to end and, with it, a bull market in fixed income that has lasted more than three decades.

“The current level of interest rates is abnormally low and there’s only one direction in which they can go, and when they start they will be rather rapid,” Greenspan said on “Squawk Box.”

Alan Greenspan told Bloomberg TV : “By any measure, real long-term interest rates are much too low and therefore unsustainable. When they move higher they are likely to move reasonably fast. We are experiencing a bubble, not in stock prices but in bond prices. This is not discounted in the marketplace.”

On December 5, 1996 the Maestro warned of “Irrational Exuberance“.

By the year 2000 Alan Greenspan embraced the “productivity miracle” of technology and no longer saw any bubbles.

As noted above, Joachim Fels, global economic adviser at Pacific Investment Management Co, suggests “there’s been a change in the fundamental economic theory of time preference that helps explain why people are buying debt with negative yields.”

To believe in negative time preference is to believe things such as “It’s better to have 90 cents ten years from now than a dollar today”.

Yields are negative only because central banks manipulated yields negative. They would never be negative on their own accord.

Zero Does Have Meaning

Alan Greenspan is wrong. Zero is very meaningful with negative being even more meaningful.

It means central banks have hit a brick wall. They cannot cram any more debt into the system. There is no tolerance for paying interest.

That’s the meaning, and the evidence is overwhelming.

Fed Trapped in a Rate-Cutting Box: It’s the Debt Stupid

As Gold Blasts Through $1500 the implied message is that central banks are out of control.

Gold has the meaning of zero correct even if central bank clowns and analysts don’t. 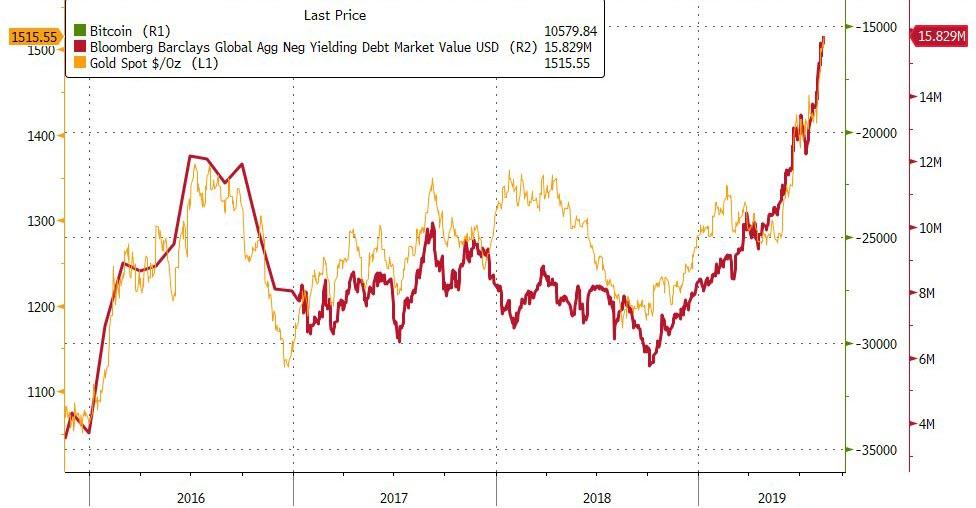