On Tuesday Trump pulled off another signature twitter shock, when just after noon, the President bowed to pressure from U.S. businesses, the stock market and concerns over the economic fallout of his trade war with China, delaying the imposition of new tariffs until December on a majority of consume goods including cell phones, laptop computers, video game consoles, certain toys, computer monitors, footwear, clothing, textiles, kitchen utensils, cookware, some watches, musical instruments, paper clips, children’s chairs, bouncers, some sporting goods, fishing tackle, combs, brushes, cigarette lighters and pipes, vacuum flasks and diapers. As we said earlier, it is almost as if Trump realized that a surge in prices of consumer goods which would inevitably have taken place had the tariffs kicked in on Sept 1…

… would have ruined any plans the Fed may have to cut rates further, just as Trump demanded. 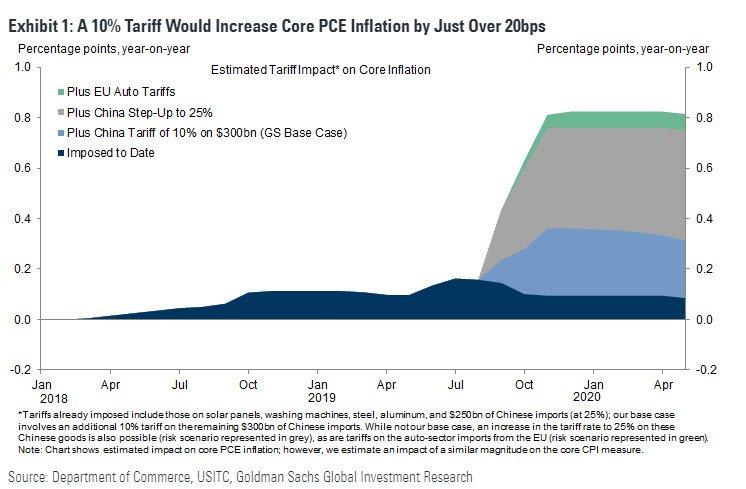 US delaying tariffs on products which would send inflation soaring

Trump figured out he won't get rate cuts if prices surge

Tuesday’s move to hit the pause button in his fight with China came as senior officials on both sides had their first phone conversation since Trump threatened the tariffs at the beginning of this month. It also cheered markets that had been growing increasingly concerned over the impact of trade tensions on a slowing global economy, and in response, stocks halted a steep two-day slide.

There were some question how Trump picked the list of goods he did to delay tariffs on. According to Axios, “the list of goods from China that won’t be subject to a 10% tariff until Dec. 15 is made up of “products where 75% or more of the 2018 U.S. imports of that product were from China,” according to an email sent to trade groups from the U.S. Trade Representative Office. And while the significance of the 75% cutoff is unclear, it is likely the threshold level for substitute goods beyond which the USTR finds that the risk of an inflationary spike is too high.

So what happens next?

According to Standard Chartered’s Steven Englander, the US will now expect China to reciprocate by buying US agricultural products in the coming weeks. That may very well not happen.But while it is unclear if the lack of a reciprocal “olive branch” would be a dealbreaker for Trump, what is likely is that any widespread shift in sentiment that Trump retreated and waved a white flag of surrender, could very quickly undo the tariff delay as the last thing Trump wants, is to be seen as weak and ineffectual, or his trade war strategy as inefficient, not by his base, and certainly not by his opponent, China.

And yet, in the first reactions to Trump’s announced tariff delay, this is precisely how China is describing today’s event.

As the state-owned, nationalist tabloid Global Times “explains” to the Chinese population, “Chinese experts said the sudden postponing of impending tariffs showed that the maximum pressure tactics of the US are losing their bite when it comes to China.”

As the Chinese tabloid further notes, “these measures are set to greatly reduce the weight of US tariffs, as electronics goods alone account for about $130 billion” and adds that according to “Chinese experts reached by the Global Times on Tuesday night the latest development showed the US maximum pressure tactic is not working on China, but they said it could pave the way for trade talks scheduled for September. However, they were cautious about the potential for any flip-flopping.”

“The US has realized that its maximum pressure strategy to force China back to the negotiating table has not worked as expected. Washington knows that only through talks can the two sides reach a deal,” Wang Jun, chief economist at Zhongyuan Bank, told the Global Times on Tuesday.

The quoted “expert” also said he doubted (correctly) whether the decision would stand, given Washington’s flip-flop approach in trade negotiations: “Trump is looking for a way out. It also shows that both China and the US are highly dependent on each other, and the practice of imposing tariffs does not necessarily bring China to its knees,” said Liang Qi, a professor from Nankai University.

Liang then added that “we also can see that imposing tariffs may harm the interests of the US, making it hard for Trump’s re-election”, suggesting that not only is the tariff delay a tacit ceasefire offer, if not outright surrender, it is also a political gambit that hands over all the leverage to China, which now will have the upper hand to determine the fate of Trump’s re-election depending on how it proceeds with trade negotiations.

Bai Ming, a research fellow at the Chinese Academy of International Trade and Economic Cooperation said that the tariff increase delay shows the US is not willing to cut off the two countries’ negotiation channels when talks are on the verge of failure.

But Bai warned that it might also be a stalling tactic as the US has found that its extreme pressure on China has not generated the results it had hoped for.

And so, with the Global Times repeating no less than three times that the US tactic of “extreme (or maximum) pressure” has failed, the implication is simple: Trump’s trade war strategy has led him to a dead end, and the result is that China now has the upper hand.

That could be a problem, because even if the Global Times is right in its assessment of the balance of power, all that would take for Trump to change his mind is to be perceived as failing – or worse, weak – in his campaign against China. And that’s precisely what the top power echelon in Beijing is now telegraphing to the population via the state-owned media.

Which leads us to believe that with Navarro still firmly in control of the trade war strategy, it is only a matter of days if not hours, before Trump once again flip flops, just as he did after the G-20 summit where the two nations allegedly reached a “ceasefire” only for it to crash and burn just weeks later.

And so, unless China buys a lot of US agri products in the coming weeks, and we don’t see any specific reason why Xi would want to “bend the knee” to a president Trump who is according to the Chinese media losing the trade war, we fully expect today’s relief rally to reverse quickly as Trump realizes that delay or no delay, a deal with China is simply impossible, as the “trade war” is not about trade at all, but an ever escalating conflict of two civilizations, one which may be resolved on the battlefield, either literally or metaphorically, but will never be decided on a piece of paper.