Authored by Michael Lebowitz via RealInvestmentAdvice.com,

“What the Market wanted to hear from Jay Powell and the Federal Reserve was that this was the beginning of a lengthy and aggressive rate-cutting cycle which would keep pace with China, The European Union and other countries around the world….” – President Donald Trump – Twitter 7/31/2019

With the July 31, 2019, Fed meeting in the books, President Trump is up in arms that the Fed is not on a “lengthy and aggressive rate-cutting” path. Given his disappointment, we need to ask what else the President can do to stimulate economic growth and keep stock investors happy. History conveys that is the winning combination to win a reelection bid.

Traditionally, a President’s most effective tool to spur economic activity and boost stock prices is fiscal policy. With a hotly contested election in a little more than a year and the House firmly in Democratic control, the odds of meaningful fiscal stimulus before the election is low.

Without fiscal support, a weak dollar policy might be where Donald Trump goes next. A weaker dollar could stimulate export growth as goods and services produced in the U.S. become cheaper abroad. Further, a weaker dollar makes imports more expensive, which would increase prices and in turn push nominal GDP higher, giving the appearance, albeit false, of stronger economic growth.

In this article, we explore a few different ways that President Trump may try to weaken the dollar.

The impetus to write this article came from the following Wall Street Journal article: Trump Rejected Proposal to Weaken Dollar through Market Intervention. In particular, the following two paragraphs contradict one another and lead us to believe that a weaker dollar policy is a possibility.

On Friday, Mr. Kudlow said Mr. Trump “ruled out any currency intervention” after meeting with his economic team earlier this week. The comments led the dollar to rise slightly against other currencies, the WSJ Dollar index showed.

But on Friday afternoon, Mr. Trump held out the possibility that he could take action in the future by saying he hadn’t ruled anything out. “I could do that in two seconds if I wanted to,” he said when asked about a proposal to intervene. “I didn’t say I’m not going to do something.”

Based on the article, Trump’s advisers are against manipulating the dollar lower as they don’t believe they can succeed. That said, on numerous occasions, Trump has shared his anger over other countries that are “using exchange rates to seek short-term advantages.”

As shown below, two measures of the U.S. dollar highlight the substance of frustrations being expressed by Trump. The DXY dollar index has appreciated considerably from the early 2018 lows but is still well below levels at the beginning of the century. This index is inordinately influenced by the euro and therefore not 100% representative of the true effect that the dollar has on trade. The Trade-weighted dollar which is weighted by the amount of trade that actually takes place between the U.S. and other countries. That index has also bounced from early 2018 lows and, unlike DXY, has reached the highs of 2002. 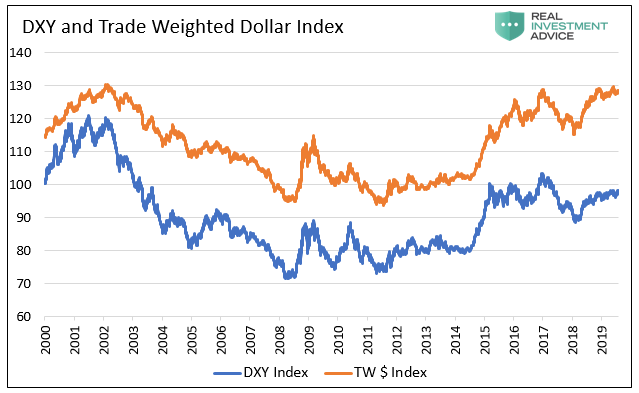 The following section provides details on how the President can weaken the dollar and how effective such actions might be.

Intervening in the currency markets by actively selling US dollars would likely push the dollar lower. The problem, as Trump’s advisers note, is that any weakness achieved via direct intervention is likely to be short-lived.

The US economy is stronger than most other developed countries and has higher interest rates. Both are reasons that foreign investors are flocking to the dollar and adding to its recent appreciation. Assuming economic activity does not decline rapidly and interest rates do not plummet, a weaker dollar would further incentivize foreign flows into the dollar and partially or fully offset any intervention.

More importantly, there is a global dollar shortage to consider. It has been estimated by the Bank of International Settlements (BIS) that there is $12.8 trillion in dollar-denominated liabilities owed by foreign entities. A stronger dollar causes interest and principal payments on this debt to become more onerous for the borrowers. Dollar weakness would be an opportunity for some of these borrowers to buy dollars, pay down their debts and reduce dollar risk. Again, such buying would offset the Treasury’s actions to depress the dollar.

The economic and interest rate fundamentals driving the stronger dollar may be too much for direct or indirect intervention to overcome.

From a legal perspective intervening in the currency markets is allowed and does not require approval from Congress. Per the Wall Street Journal article, “The 1934 Gold Reserve Act gives the White House broad powers to intervene, and the Treasury maintains a fund, currently of around $95 billion, to carry out such operations.” The author states that the Treasury has not conducted any interventions since 2000. That is not entirely true as they conducted a massive amount of currency swaps with other nations during and after the financial crisis. By keeping these large market-moving trades off the currency markets, they very effectively manipulated the dollar and other currencies.

The President aggressively chastised Fed Chairman Powell for not cutting interest rates or ending QT as quickly as he prefers. Lowering interest rates to levels that are closer to those of other large nations would potentially weaken the dollar. The only problem is that the Fed does not appear willing to move at the President’s pace as they deem such action is not warranted. We believe the Fed is very aware that taking unjustifiable actions at the behest of the President would damage the perception of their independence and, therefore, their integrity.

To solve this problem, Trump could take the controversial and unprecedented step of firing or demoting Fed Chairman Powell.  In Powell’s place he could put someone willing to lower rates aggressively and possibly reintroduce QE. These steps might push financial asset prices higher, weaken the dollar, and provide the economic pickup Trump seeks but it is also fraught with risks. We have written two articles on the topic of the President firing the Fed Chairman as follows: Chairman Powell You’re Fired and Market Implications for Removing Fed Chair Powell.

It is not clear whether the President can get away with firing or even demoting Chairman Powell. We guess that he understands this which may explain why he has not done it already. If he cannot change Fed leadership, he can continue to pressure the Fed with Tweets, speeches, and direct meetings. We do not think this strategy can be effective unless the Fed has ample reason to cut rates. Thus far, the Fed’s mandates of “maximum employment, stable prices, and moderate long-term interest rates” do not provide the Fed such justification.

One of the core topics in the U.S. – China trade talks has been the Chinese Yuan. In particular, Trump is negotiating to stop the Chinese from using their currency to promote their economic self-interests at our expense. As of writing this, the U.S. Treasury deemed China a currency manipulator. Per the Treasury: “As a result of this determination (currency manipulator), Secretary Mnuchin will engage with the International Monetary Fund to eliminate the unfair competitive advantage created by China’s latest actions.” Said differently, the U.S. and other nations can now manipulate their currency versus the Chinese Yuan.

It is plausible that Trump might pressure other countries, including our allies in Europe and Japan as well as Mexico and Canada, to strengthen their respective currencies against the dollar. Trump can threaten nations with trade restrictions and tariffs if they do not comply. If tariffs are enacted, however, all bets are off due to the economic inefficiencies of tariffs or trade restrictions. To the President’s dismay, such action weaken the economy and scare investors as we are seeing with China.

Threats of trade actions, trade-related actions, or trade agreements might work to weaken the dollar, but such tactics would require time and pinpoint diplomacy. Of all the options, this one requires longer-term patience in awaiting their effect and may not satisfy the President’s desire for short-term results.

Before summarizing we leave you with one important thought and certainly a topic for future writings.Globally coordinated monetary policy is morphing into globally competitive monetary policy. This may be the most significant Macro development since the Plaza Accord in 1985 when the Reagan administration, along with other developed nations (West Germany, France, Japan, the UK), coordinated to weaken the U.S. dollar.

With the Presidential election in about 15 months, we have no doubt that President Trump will do everything in his power to keep financial markets and the economy humming along. The problem facing the President is a Democrat-controlled House, a Fed that is dragging their feet in terms of rate cuts, weakening global growth, and a stronger U.S. dollar.

We believe the odds that the President tries to weaken the dollar will rise quickly if signs of further economic weakness emerge. Given the situation, investors need to understand what the President can and cannot do to spike economic growth and further how it might affect the prices of financial assets.

The statistical relationships between the dollar and other asset classes are important to quantify if in fact the dollar may become an economic tool for the President. A full spectrum of those relationships over various timeframes may be found in an addendum to this article for RIA Pro subscribers. Give us a try. All new subscribers receive a 30 day free trial to explore what we have to offer and view the addendum.

Who Is To Blame For Biden’s Campaign Failing? Russia, Of Course!

On Taxpayers’ Dime, Foreigners Get Free College In US

Epstein Trafficked Girls As Recently As 2018 – Some As Young As 11, According To Lawsuit By Virgin Islands AG

Who Is To Blame For Biden’s Campaign Failing? Russia, Of Course!

On Taxpayers’ Dime, Foreigners Get Free College In US