Anti-Trump former FBI agent Peter Strzok is suing the Justice Department, FBI, Attorney General William Barr and FBI Director Christopher Wray after he was fired over a trove of text messages between he and his paramour, former FBI lawyer Lisa Page.

In a suit filed Tuesday, Strzok claims that the FBI caved to “unrelenting pressure” from President Trump when he was fired, according to the Associated Press.

The suit from Peter Strzok also alleges he was unfairly punished for expressing his political opinions, and that the Justice Department violated his privacy when it shared hundreds of his text messages with reporters. –Associated Press

“The campaign to publicly vilify Special Agent Strzok contributed to the FBI’s ultimate decision to unlawfully terminate him,” reads the lawsuit. “as well as to frequent incidents of public and online harassment and threats of violence to Strzok and his family that began when the texts were first disclosed to the media and continue to this day.”

Strzok’s lawsuit accuses the government of violating his First and Fifth Amendment rights by firing him over the text messages, and then depriving him of due process to challenge his ouster. Moreover, Strzok says that the DOJ’s decision to transmit the incendiary messages to reporters before Congress had a chance to see them was “deliberate and unlawful,” and a violation of the Privacy Act.

Strzok’s anti-Trump sentiment came to light after an internal investigation revealed he and Page had exchanged approximately 50,000 text messages – many of which contained obvious animus towards then-candidate Donald Trump.

Strzok’s position in the bureau had been precarious since last summer, when Inspector General Michael E. Horowitz told Special Counsel Robert S. Mueller III that the lead agent on his team had been exchanging anti-Trump messages with an FBI lawyer. The next day, Mueller expelled Strzok from the group.

The lawyer, Lisa Page, had also been a part of Mueller’s team, though she left a few weeks earlier and no longer works for the FBI. She and Strzok were having an affair. –Washington Post

Perhaps the most alarming of the exchanges mentions an “insurance policy” in the event Trump is elected.

“I want to believe the path you threw out for consideration in Andy’s office – that there’s no way he [Trump] gets elected – but I’m afraid we can’t take that risk.” Strzok wrote to Page, adding “It’s like a life insurance policy in the unlikely event you die before you’re 40.”

In another text exchange, Strzok tells Page: “I am riled up. Trump is a f*cking idiot, is unable to provide a coherrent answer,” and “I CAN’T PULL AWAY, WHAY THE F*CK HAPPENED TO OUR COUNTRY (redacted)??!?!”

Page then messages Strzok, saying “And maybe you’re meant to stay where you are because you’re meant to protect the country from that menace. (links to NYT article), to which Strzok replied “I can protect our country at many levels.”

PS – … I can protect our country at many levels, not sure if that helps

And now, it looks like Strzok is making use of his nearly $450,000 GoFundMe contributions. 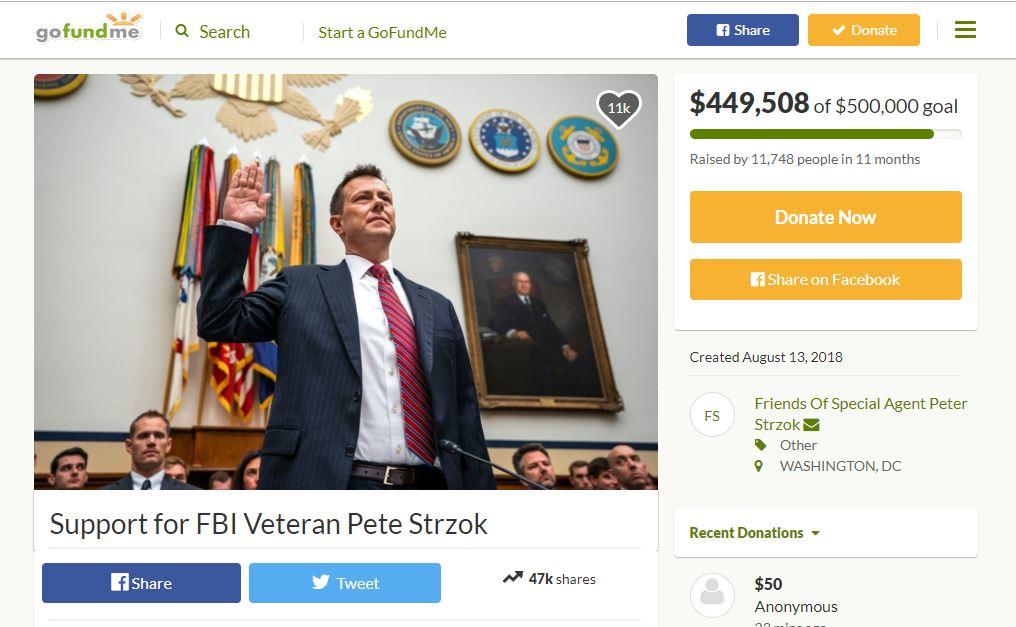