Now that President Trump has boxed Jerome Powell into a corner by declaring his intention to slap tariffs on the other ~$300 billion in Chinese goods that haven’t already been impacted come the first of September, it’s worth considering: How will Beijing respond to all of this?

So far, Chinese media has been quiet on the subject, even as domestic markets tumble and the yuan slides. That’s possibly because China’s senior lawmakers have departed to the seaside resort of Beidaihe for their annual two-week policy conclave. Typically, officials from President Xi on down disappear from public view as they debate policy. But Beijing’s minister of foreign trade has already made clear that Beijing is less than pleased with President Trump’s latest announcement which, like the last one, took them completely by surprise (though it’s not all that surprising considering that the latest round of trade talks barely lasted half a day.

Beijing has already levied retaliatory tariffs on about $110 billion in imports from the US. Based on 2018 data, that leaves another $45 billion of products that could be hit with tariffs.

Here’s what Bloomberg‘s economists had to say:

“Assuming Trump’s tweet becomes policy, we’d expect a proportionate reaction from China. That would mean more tariffs on imports from the US. We don’t think China would shoot itself in the foot with harassment of US. firms or sales of US. Treasuries.”

But with China halting or dialing back purchases of American pork and soybeans, imports are down 30% in the first six months of this year compared to 2018. So the goods that could actually be hit is much lower. 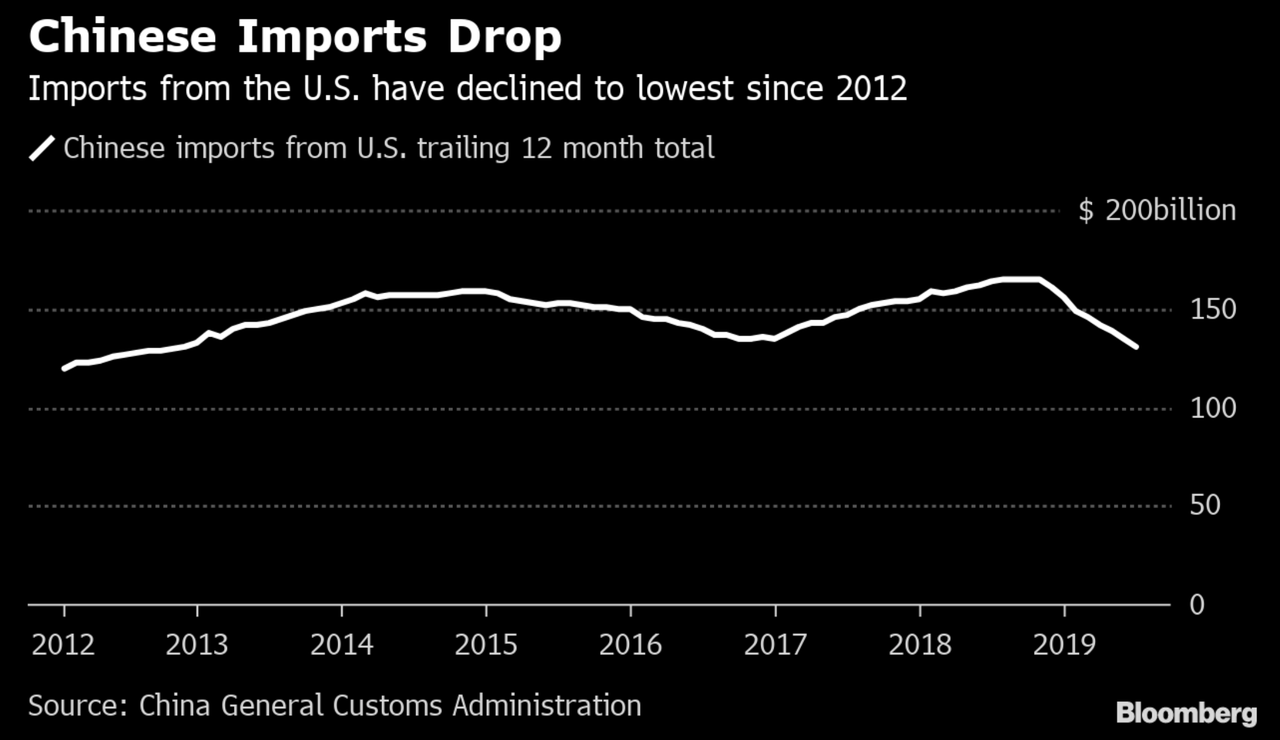 As an opening salvo, Beijing could reinstate the tariffs on US cars that it lifted as part of a goodwill gesture, Bloomberg reports.

Mouthpieces for the Communist Party like Hu Xijin have also suggested that Beijing will likely walk away from the talks altogether should the US move ahead with its tariffs, as Beijing shifts its focus to how it should function during a prolonged trade war.

New tariffs will by no means bring closer a deal that the US wants, it will only make it further away. I think the Chinese will no longer give priority to controlling trade war scale, they will focus on the national strategy under a prolonged trade war.

As far as I know, China has recently sped up buying US farm products, public opinion is helping make the adjustment. But Pre Trump is in a rush to reach a deal & is too arrogant. Influenced by wrong intelligence,he misjudges China in many fields. He may make big mistake on China.

Just as they threatened to do a few months back, Beijing could look to its stranglehold on the supply of rare earth metals as one avenue for retaliation. Investors are already betting that Beijing could choose this option, sending shares of rare-earth miners higher in Friday’s trade.

Beijing might even walk back its promise to buy US oilseeds as a goodwill gesture, something it promised to do before the latest round of talks began. With the harvest just around the corner, now is a critical time for farmers, as buyers typically start booking orders for the new American harvest.

Beijing needs low-sulfer US crude – which is one reason why it hasn’t been hit with tariffs yet. But it could increase the already 25% tariff on LNG. Since there’s a market glut, Beijing doesn’t need it.

Another option is to follow through with threats to include FedEx and any other US companies that have offended Beijing to its promised “unreliable entities” list. Few details have been released, but many expect the unreliable entities list to be similar to the Commerce Department’s entities list, the “blacklist” that Huawei was placed on.

Boeing’s shares tanked following Trump’s tariff announcement, and with good reason: the aerospace giant is in the middle of negotiations with Chinese airlines to complete a massive order.

Economists, though, are sharing their views, and most are pretty downbeat.

And there’s always Huawei. If Trump goes back on the promises he made to President Xi in Osaka, it could open up a whole can of worms as Beijing might walk away from all future talks.

At any rate, it’s becoming increasingly clear to economists that Beijing is seeking to slow down the pace of trade talks and retaliation as it hopes to wait out Trump’s term, in the hopes that a Democratic successor might be easier to deal with.

“China’s strategy in this trade war escalation will be to slow down the pace of negotiation and tit-for-tat retaliation,” according to a note from Iris Pang, an economist at ING bank NV in Hong Kong. “This could lengthen the process of retaliation until the upcoming U.S. presidential election. It won’t have escaped the authorities in China’s attention that a full-blown trade war is unlikely to help President Trump’s chances in the election.”