Authored by Raul Ilargi Meijer via The Automatic Earth blog,

First of all, I dearly wish I never had to read or write about Jeffrey Epstein again. But I can’t. And going over the reports about him, and watching the videos below (I’m sure there’s a thousand more), I started thinking I don’t see how he can have much longer to live. (Note as always that if you receive this through email, the videos may not show properly. If someone can explain why, and what to do about that, I’m game. Meanwhile, please go to the TAE site.)

There are three main threats to Jeffrey Epstein’s life (or four, if you include his victims). 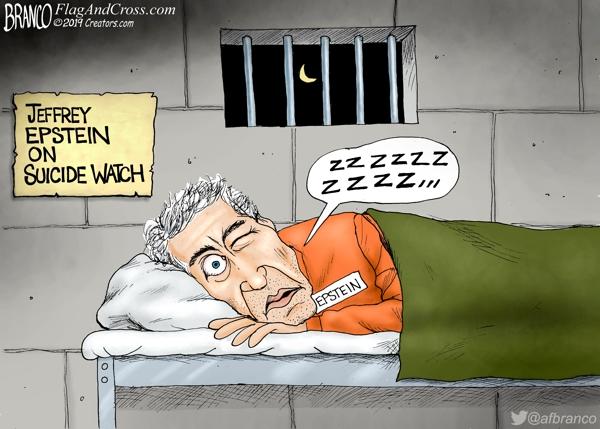 No. 1 is his fellow inmates in the Manhattan MCC. He’ll be in very strict isolation, because inmates and pedophilia is a very explosive combination. So isolation, but that’s never 100%.

And Judge Berman yesterday ordered him in jail until his trial(s), instead of in his $77 million Manhattan mansion not far from that same prison, so he’ll be there a while; that trial could take a very long time to happen, even years. All the more chance for an inmate to make an easy $1000 by offing him.

The no. 2 threat is Epstein himself. Berman’s decision means he’s very unlikely to ever get out again. Chances of him being declared innocent are as close to zero as as anything Kelvin. So why would he want to continue to live? Perhaps his lawyers try and tell him he’s always got a shot, and there’s always a next court date, but he doesn’t strike me as fully delusional.

I could be wrong, sure, about much of all this, but I don’t think so.

The no. 3 threat is, obviously, the people he might “sing” about. And that’s an litany of the world’s who’s who. No doubt the FBI may already have their IDs and photos and what-not, but why chance it when you can take down the -potential- crown witness?

Now, if we may believe just 10% of what George Webb talks about in the last video in this article, everybody who’s anybody in government, secret services et al in the whole wide world should feel threatened right now. But those 2,000 pages from 2015 that Judge Berman ordered to be unsealed are not yet public, and you can bet your donkey that the cream of the global lawyer and secret service crop are going over them as you read this.

Will we ever know what Epstein really did? The odds are not in favor of that. But let’s try and have a look anyway. See if we can -to an extent- make up our minds based on that.

First up, an interview with Virginia Roberts Giuffre, one of Epstein’s main accusers. And Ghislaine Maxwell’s, don’t let’s forget that. She’s still walking around free, amazingly.

This is a Miami Herald video linked to Julie K. Brown’s series for the Miami Herald last fall on Epstein. It was posted to YouTube by the Miami Herald on Nov 30, 2018. It took another 8 months for him to be arrested. The 2,000 pages “supposed” to be unsealed soon stem from a case Roberts Giuffre brought in 2015.

Fast forward to the present, this is from RT on July 18, tackling the fact that Judge Berman refused to let Epstein out on bail. It’s not all the greatest stuff, but you DO get the feeling.

This I found interesting, Fox, also from July 18, because it targets Prince Andrew. Is MI6 going to be able to muffle away the obviously very strong and long-term connection between Epstein and Andrew? I’m thinking they’d probably have to get those 2,000 pages re-sealed. Or, you know, burned down. Nuked.

And then there’s George Webb. Now he is, I understand, someone who’s known as a conspiracy theorist, but then many people are in some circles, including myself, This video was posted on July 8 2019, 2 days after Epstein’s arrest. My thought while watching this is he may be wrong on some things, he may even be making a few points up, but when you’re that detailed on events that occurred over such a long time, you’re either on very powerful drugs or you’re not entirely wrong. Check for yourself.

To summarize my thoughts on this, and the reason I started writing this, I can’t see Epstein living much longer. There are too many people who would rather see him dead, including perhaps himself. And there are very few people who want him to get into lengthy talks with prosecutors who are actually looking for the truth.

Now of course we must wonder if any prosecutor wants that truth. Alex Acosta left his US government job because “Epstein is intelligence” was not enough to let him keep his job. And if we can believe some of the stories about the CIA, the State Dept and Mossad being linked to Epstein (and we got worse than that), it looks like he’s just got to go. Unless someone, or some party involved, has a reason to protect him against all odds. If only to handicap some other people.

After this piece I really hope I never have to write about this topic again. My hopes of that are not overly high, but I do have to say I have a very hard time thinking about child -sex- abuse. I also think we must think much harder about why it is that we pick predators to lead our societies. Because this hardly ever fails, doesn’t it? A bunch of sexual deviants rise to the top everywhere.

Sexual predation appears to be some inevitable part of political power. Not everywhere and not all the time, but far too much for comfort.

Let’s hope enough of those predators are exposed through the Jeffrey Epstein case. But, you know, listening to George Webb, you think of the oil sheikhs and the girls being trafficked by Epstein and others, from the Balkans and dirt poor African countries, and you ask yourself, what are the odds of full exposure?

Support The Automatic Earth on Patreon.

All The World’s Wealth In One Visualization

944 Trillion Reasons Why The Fed Is Quietly Bailing Out Hedge...