Authored by Sarah Cowgill via LibertyNation.com,

So much for the border crisis being a charade – Gov. Grisham went to the Swamp to beg for help.

The radical-leftist governor of New Mexico, who sent National Guard troops packing in February, needs federal help now, it seems. She’s in the Swamp to beg for funding as illegal immigrants overwhelm the state. After months of neglecting the border cities and towns, toeing the DC elite party line of no “crisis” here, and facing a veritable citizens’ revolt in the Land of Enchantment, Governor Michelle Lujan Grisham is demanding federal government assistance for the dire situation – one she exacerbated through indifference to constituents.

And it comes on the heels of yet another county drawing a line in the sand and refusing any further influx of illegal immigrants seeking asylum. Sierra County, boasting a population 11,116 and a 21% poverty rate, joined Otero and Lincoln counties in passing resolutions opposing the relocation of migrants to their communities.

This isn’t just happening in these three counties, either – it’s an untenable and cruel situation being thrust on an impoverished state by government officials who seem to be mere puppets for the Democratic Party.

According to Deming City Administrator Aaron Sera, in Luna County, buses unload between 300 and 500 immigrants each day. As a town of a 14,183, it has been mercilessly overwhelmed by the governor’s dangerous game of partisan politics. Even larger enclaves, such as Las Cruces, have been overrun with illegal aliens, completely depleting community and local government resources as they’re  forced to house and care for 6,000 asylum seekers – and all in a matter of four short weeks.

Otero County Commission Chairman Couy Griffin is a vocal detractor of what he believes are dangerous decisions coming from Grisham. Griffin is an advocate of legal immigration and stands firm in the belief that sheltering illegals sends the wrong message to other Central Americans, who see an opportunity to enter the United States illegally. “If you begin to feed pigeons in the parking lot, pretty soon you have every pigeon in town,” Griffin said. He has asked President Trump to close the border after resources were removed from a local, heavily trafficked checkpoint.

Tripp Stelnicki, the governor’s spokesman, claims there is no evidence humanitarian aid would encourage other Guatemalans, El Salvadorans, or Hondurans to make the trek north. Well, it isn’t much of a deterrent, either.

In February, Grisham made national news for thumbing her nose at the president, her citizens, and national security when she sent the National Guard packing. She blithely stated: “New Mexico will not take part in the president’s charade of border fear-mongering,” and received a blast of positive kudos from Democrat toadies in the Swamp. It fit their narrative perfectly and from a border state to boot. 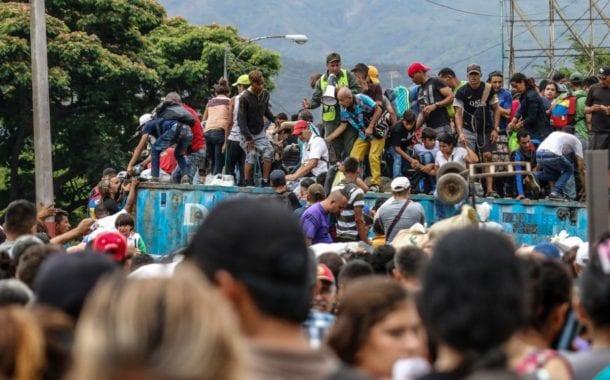 But three short months later, after recall and impeachment petitions, shameful national news coverage of cities and towns overwhelmed by the “charade,” and 31 of 33 counties expressing their disdain for Grisham through resolutions, the governor is now asking President Trump and the Department of Homeland Security for their help.

“The governor wants to continue to urge the federal government to increase its personnel on the border as a means of improving the logistical and communications output,” said spokesman Tripp Stelnicki, whose head must be spinning like a top after Grisham’s desperate about face. He also hinted that the events in Otero County may be spiking fear in Grisham as other municipalities and counties are jumping on Griffin’s bandwagon. And frankly, no one is buying what Grisham is selling anymore.

Steve Pearce, Chairman of the New Mexico Republican Party, who ran against Grisham in 2018 for the role of governor, reminded:

“She declares there’s no crisis. She removes the National Guard and now she’s there asking for money. Everything in her actions indicate that she believes there’s a crisis, but yet she will not dedicate the resources or request to her colleagues in Congress to start passing the laws that will change the situation there.”

The Trump administration will ensure that resources for the state are granted but it won’t come for free – there will a pound of flesh extracted from the foolish New Mexico governor to be spiked and paraded through the 2020 election.  Perhaps after a disastrous first quarter in office, Grisham will begin to listen to her constituents. But it’s doubtful – which is why a recall or impeachment is still being pursued by citizens. What should terrify the governor is this highly motivated electorate, bent on removing her from office – and that describes the uprising in the Land of Enchantment to a “T.”

“Jeffrey And I Had Everyone On Videotape” Ghislaine Maxwell Reportedly Told...