Authored by John Rubino via DollarCollapse.com,

The past decade was a uniquely smooth stretch of financial highway. Pretty much every major asset class – stocks, bonds, real estate, fine art, you name it – did well, making it hard for conventional investors to lose money and easy for them to earn outsized returns.

So why then are US public sector pensions (which own a ton of the above assets) a looming disaster that could trigger the next great financial crisis?

Let’s start with the fact that Wall Street preys on the ignorance of pension fund managers to extract huge fees for little or no excess return. Here’s a video in which pension expert and “forensic lawyer” Ted Siedle lays it all out for Peak Prosperity’s Chris Martenson:

An even bigger problem is the tendency – understandable but still despicable – of state and local politicians to underfund pensions and then lie about it, pushing the eventual reckoning onto their successors.

As baby boomer teachers, police and firefighters retire, the required pension payouts are soaring. Combine this with inadequate contributions, and the liabilities of major U.S. public pensions are up 64% since 2007 while assets are up only 30%.

This math is simple enough for even a politician or fund trustee to grasp, but because there’s no immediate penalty for underfunding a pension system, it has become normal practice in a long list of places.

Another, related problem is also mathematical, but it’s harder to manage in a boom-and-bust world: When pension plans suffer a big loss, as they tend to do in bear markets, the next few years’ returns have to go towards making up that loss before plan assets can start growing again. The following chart, from a recent Wall Street Journal article, shows pension fund assets falling behind in the past two bear markets and having increasing trouble catching up with steadily-growing liabilities. 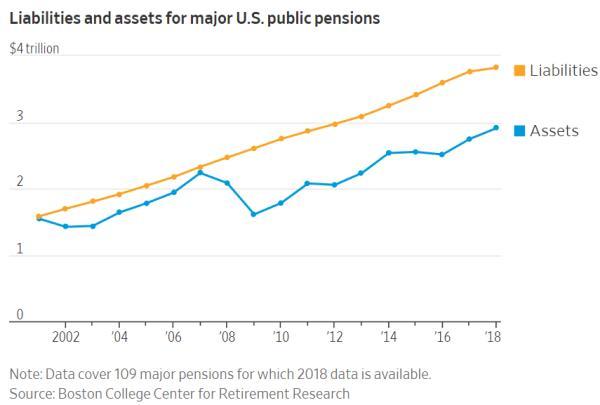 In some cases this puts funds permanently behind the curve and can only be fixed with massive infusions of taxpayer cash or draconian benefit cuts, neither of which are feasible in a system that punishes hard choices. The next chart shows how much more the worst offenders would have to contribute to their plans to get by with honest future return assumptions. For Illinois, Kentucky and New Jersey this will never happen. 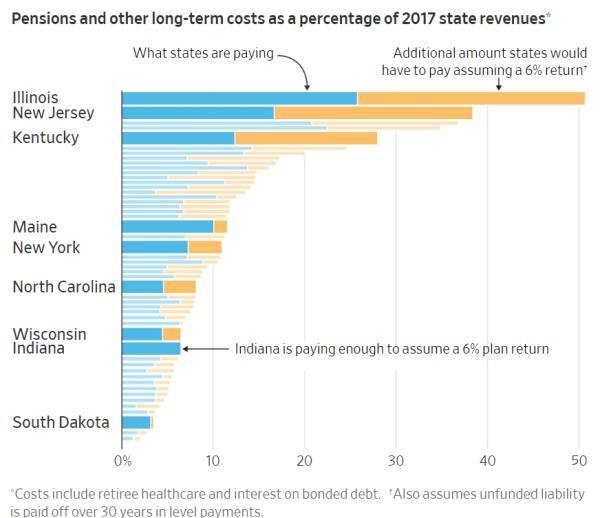 What does all this mean? A few things:

In the next bear market the pension funds that are already wildly underfunded will fall into a financial black hole from which they’ll never be able to escape.

Those states and cities – many of which are issuing bonds to cover their day-to-day expenses – will be exposed as junk credits (as Chicago was recently) and will have to either pay way up to borrow or enact some combination of tax increases (politically almost impossible) or pension benefit cuts (legally impossible in many places) which will cause chaos without fixing the underlying problem.

The weakest cities and the states in which they reside will be forced to default on some of their obligations, stiffing suppliers, creditors, and/or employees. This will throw the municipal bond market into chaos as investors, worried that the next Chicago is lurking in their portfolios, dump the whole muni sector.

Faced with a cascade failure of a crucial part of the fixed income universe, the federal government will react the way it did when the mortgage market imploded in 2008, with a massive taxpayer funded bailout.

At which point there’s a good chance of the crisis spreading from pensions to currencies, as the world finally realizes that the bailouts are just beginning, with US states and cities soon to be followed by student loans, emerging markets, and European failed states. So keep an eye on Chicago and be ready to bail when that ship starts sinking.

“I’ll Straight Up Get Armed”: Second Bernie Organizer Loves Gulags And Is “Ready For The F**king Revolution”

Trump Jr.: “Democrats And Media Hate Trump Much More Than They Love America”