Having been mocked by her own leadership (and much of social media) Alexandria Ocasio-Cortez (AOC) – the little socialist that could – faces the final condemnation tonight as The Wall Street Journal surveyed the Bronx Congresswoman’s “Green New Deal” resolution… and was left in hysterics, with Kimberley Strassel tweeting:

“By the end of the Green New Deal resolution (and accompanying fact sheet) I was laughing so hard I nearly cried. If a bunch of GOPers plotted to forge a fake Democratic bill showing how bonkers the party is, they could not have done a better job. It is beautiful. ”

Leaving the outspoken reporter with only one conclusion:

” The Republican Party has a secret weapon for 2020. It’s especially effective because it’s stealthy: The Democrats seem oblivious to its power. And the GOP needn’t lift a finger for it to work.

All Republicans have to do is sit back and watch 29-year-old Rep. Alexandria Ocasio-Cortez . . . exist.”

And while we already highlighted the most shocking proposals from the “Green New Deal,” we leave it to Strassel to destroy it line by line…

AOC, as she’s better known, today exists largely in front of the cameras. In a few months she’s gone from an unknown New York bartender to the democratic socialist darling of the left and its media hordes. Her megaphone is so loud that she rivals Speaker Nancy Pelosi as the face of the Democratic Party. Republicans don’t know whether to applaud or laugh. Most do both.

For them, what’s not to love? She’s set off a fratricidal war on the left, with her chief of staff, Saikat Chakrabarti, this week slamming the “radical conservatives” among the Democrats holding the party “hostage.” She’s made friends with Jeremy Corbyn, leader of Britain’s Labour Party, who has been accused of anti-Semitism. She’s called the American system of wealth creation “immoral” and believes government has a duty to provide “economic security” to people who are “unwilling to work.” As a representative of New York, she’s making California look sensible.

On Thursday Ms. Ocasio-Cortez unveiled her vaunted Green New Deal, complete with the details of how Democrats plan to reach climate nirvana in a mere 10 years. It came in the form of a resolution, sponsored in the Senate by Massachusetts’ Edward Markey, on which AOC is determined to force a full House vote. That means every Democrat in Washington will get to go on the record in favor of abolishing air travel, outlawing steaks, forcing all American homeowners to retrofit their houses, putting every miner, oil rigger, livestock rancher and gas-station attendant out of a job, and spending trillions and trillions more tax money. Oh, also for government-run health care, which is somehow a prerequisite for a clean economy.

It’s a GOP dream, especially because the media presented her plan with a straight face – as a legitimate proposal from a legitimate leader in the Democratic Party. Republicans are thrilled to treat it that way in the march to 2020, as their set-piece example of what Democrats would do to the economy and average Americans if given control. The Green New Deal encapsulates everything Americans fear from government, all in one bonkers resolution. 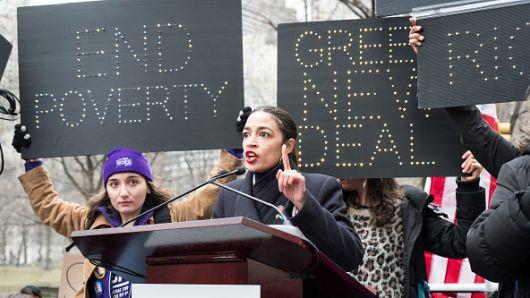 It is for starters, a massive plan for the government to take over and micromanage much the economy. Take the central plank, its diktat of producing 100% of U.S. electricity “through clean, renewable, and zero-emission energy sources” by 2030. As Ron Bailey at Reason has noted, a 2015 plan from Stanford envisioning the goal called for the installation of 154,000 offshore wind turbines, 335,000 onshore wind turbines, 75 million residential photovoltaic (solar) systems, 2.75 million commercial solar systems, and 46,000 utility-scale solar facilities. AOC has been clear it will be government building all this, not the private sector.

And that might be the easy part. According to an accompanying fact sheet, the Green New Deal would also get rid of combustion engines, “build charging stations everywhere,” “upgrade or replace every building in U.S.,” do the same with all “infrastructure,” and crisscross the nation with “high-speed rail.”

Buried in the details, the Green New Deal also promises government control of the most fundamental aspects of private life. The fact sheet explains why the resolution doesn’t call for “banning fossil fuels” or for “zero” emissions across the entire economy—at least at first. It’s because “we aren’t sure that we’ll be able to fully get rid of farting cows and airplanes that fast” (emphasis mine).

This is an acknowledgment that planes don’t run on anything but fossil fuel. No jet fuel, no trips to see granny. It’s also an acknowledgment that livestock produce methane, which has led climate alarmists to engage in “meatless Mondays.” AOC may not prove able to eradicate “fully” every family Christmas or strip of bacon in a decade, but that’s the goal.

Finally, there is the one little problem of how to pay for all this ‘free shit’ – never you mind says AOC, that’s what taxes-on-the-rich and a printing press are for…

…the resolution is Democratic math at its best. It leaves out a price tag, and is equally vague on what kind of taxes would be needed to cover the cost. But it would run to tens of trillions of dollars. The fact sheet asserts the cost shouldn’t worry anyone, since the Federal Reserve can just “extend credit” to these projects! And “new public banks can be created to extend credit,” too! And Americans will get lots of “shared prosperity” from their “investments.” À la Solyndra.

At least some Democrats seem to be aware of what a danger this is, which is why Ms. Pelosi threw some cold water on the Green New Deal this week. They should be scared. Ms. Ocasio-Cortez is a freight train gaining speed by the day—and helping Republicans with every passing minute.

Finally, it is worth noting that, on the day AOC unveiled her socialist utopian dream for Amerika – and the way she hopes to pay for it – the sovereign risk of the United States of America surged…