Update: Michael Cohen’s attorneys – based on the Avenatti’s errors that we lay out below, confusing one ‘Cohen’ with another; as well as questioning the legitimacy of how the bank records were obtained – are disputing Michael Avenatti’s report, demanding that Stormy Daniels motion to intervene not be granted.

Avenatti released a seven-page dossier on Tuesday containing various claims of financial malfeasance by President Trump’s personal attorney, Michael Cohen. “But there is one problem with the document,” writes the Daily Caller‘s Chuck Ross…

two of the allegedly “fraudulent” payments were made to men named Michael Cohen who have no affiliation with Trump.

Avenatti’s report includes a section listing “possible fraudulent and illegal financial transactions” involving Trump’s lawyer. One of the payments is a $4,250 wire transfer from a Malaysian company, Actuarial Partners, to a bank in Toronto.

The other is a $980 transfer from a Kenyan bank to Bank Hapoalim — the largest bank in Israel. –Daily Caller

In an email sent by one of the misidentified Michael Cohens to the Daily Caller, Avenetti is excoriated for not doing more research before releasing information.

“You are surely aware of the fact that this is an extremely common name and would request that you take care before involving innocent parries [sic] in this sordid affair,” wrote Cohen, who told Avenatti he is an international consultant who was paid by Actuarial Partners for work on a project in Tanzania. (Chuck Ross, Daily Caller)

“Actuarial Partners have already received inquiries from the press in this regard, and we would like to see this scurrilous rumour spiked as soon as possible.” 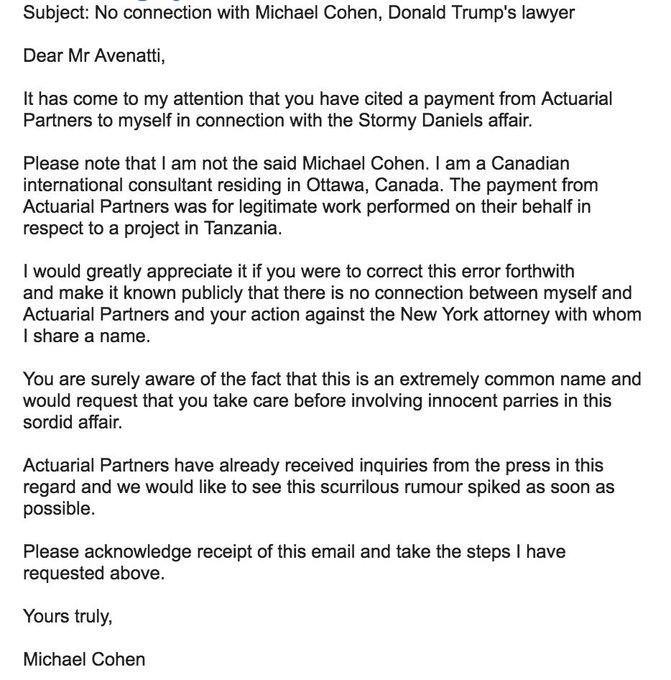 “Mr. Cohen received one wire transfer in the amount of $980.00 from a Kenyan bank from account holders Netanel Cohen and Stav Hayun to an account in Israel at Bank Hapoalim,” Avenatti wrote in his dossier.

“I’ve never heard of Michael Cohen, and I have no connection to this affair,” said Netanel Cohen – who acknowledged to Haaretz that he transferred money to his brother, Michael Cohen, from his Kenyan bank account.

How did Avenatti obtain this information?

Earlier today we reported that the Treasury Department’s inspector general has launched an investigation into how the confidential banking information for Essential Consultants LLC, the company controlled by President Trump’s personal attorney, was leaked, reports the Washington Post.

Rich Delmar, counsel to the inspector general, said that in response to media reports the office is “inquiring into allegations” that Suspicious Activity Reports on Cohen’s banking transactions were “improperly disseminated.”

And as Chuck Ross points out –  It remains a mystery how the financial records of a completely separate Michael Cohen would have ended up in the tranche of documents provided to Avenatti.

The Michael Cohen linked to Trump did however receive payments from AT&T, Novartis and Columbus Nova – a firm linked to Russian oligarch Viktor Vekselberg. While Avenatti’s original reporting suggested that Columbus Nova was “controlled” by Vekselberg, Columbus hit back in a statement saying that the report was patently untrue.

Novartis, meanwhile, defended their payments to Cohen for “healthcare” matters – and said that after they held their first meeting in March 2017, determined that Cohen would be “unable to provide the services that Novartis had anticipated related to US health-care policy matters” – while AT&T says they paid Cohen for insight into the innerworkings of President Trump.

Note To Rioting Americans: A Guide To Safe & Profitable Looting

Police Use Contact Tracing And Big Tech To Identify Protesters

Ideas For Righteous Revolution – Deeper Into The Fourth Turning, We Go

Note To Rioting Americans: A Guide To Safe & Profitable Looting